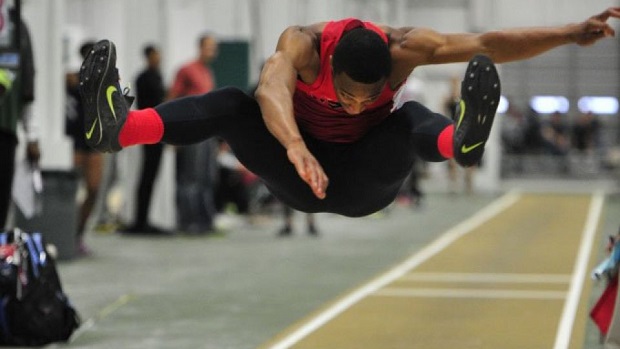 The NCHSAA's newest state meet will open the door to a whole new batch of contenders, all wanting to bring home the first championship ever in each event.  Let's take a look at some of the candidates in each category of events:

It might be a new state meet, but there's one thing that hasn't changed: Isaiah Moore (Cummings) is probably the best all-around athlete in the state.  As the top returner in the nation in the 55 Hurdles, having run 7.30 last winter, he sets the standard for any classification.  If there is anyone in the state that could possibly match Moore for national visibility, it is Trentavis Friday (Cherryville).  The top returning sprinter in the state, Friday is making his indoor debut this season; however, with PR's of 10.37, 20.79, and 46.97 outdoors, you can just imagine how great he can be in the 300.  Having the two best male track athletes in the smallest classification might steal the headlines, but there are other athletes worth noting here.  Chris Graham (North Brunswick) followed up fast polar bear times with a championship performance in the 55 Dash.  His teammate Kyheem Cheatham has the best returning time in the 300, which means they have 2 legs to a strong relay, as well.  Amari Devaughn (TW Andrews) was the top 1A/2A finisher in the 500 last winter.  Finally, keep your eye out for several sprinters that ran well outdoors and could make a splash inside if they choose to run in the winter: Johnny Frasier (Princeton), Juwan Crowder (Forest Hills), Aaron Hamilton (Northeastern), and Brian Sessoms (Carver).

Did we mention that Isaiah Moore is really good?  In addition to his hurdling virtuosity, he is also the top returning long jumper in the nation with his mark of 23' 10.5" (he jumped 24' 8.5" outdoors).  Moore has also cleared 6' 7" in the high jump, which makes him the heavy favorite to win three individual events (although if Franklinton's Rondez Taylor competes during indoor season, he could also take the title).  Isaiah has also talked about taking up the triple jump, by the way.  To win that fourth event, he would have to jump over 45 feet, because Kyheem Cheatham has gone 44' 6.75".  Dijoun Huitt (Bunker Hill) could be a contender, though his 44' 8.5" jump came during outdoor season.  The shot put is wide open, with William Richardson (Cummings) and Raymond Salazar (Surry Central) both having thrown over 43 feet last winter; Richardson threw 49 outdoors, as did Alexis Archie (North Rowan), who didn't throw indoors last year.  The most interesting event, however, could be the pole vault.  There is only one returner in the classification who meets last year's standard for state meet qualification, although there are four guys who went 12' or higher outdoors.  Who wants the gold medal in the vault?

The top returner in the 1000, Mick Stanovsek, has moved out of state.  That makes Elijah Inuwah (Central Academy of Technology) the favorite, especially since he won the 2A outdoor title in the 800.  Jeffrey Dover (Currituck) was just a step behind him there, and should be on his heels again this winter.  As the distance gets longer, Zach Boone (Mitchell) gets stronger - strong enough to be the favorite in the 1600 and 3200.  His teammate Brandon King is no slouch, either, and the two of them could rack up some solid points for their school.  Keep an eye on Blanton Gillespie (Shelby), whose breakthrough happened last spring, as well as Chris O'Brien - the Raleigh Charter senior wants to put up some impressive track times to match his cross country marks, and he could be a force in the 3200.  Maiden's Corbin Boyles didn't run indoors last year, but if he does he should be sub-10.  If you're interested in dark-horse candidates, watch out for Science & Math teammates Josh Rees-Jones and Nicholas Walker.