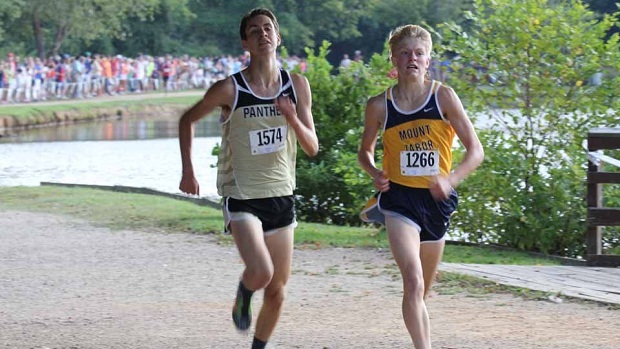 Deja vu?  These two friends already had one epic finish at McAlpine this season, and this weekend could produce another.

Since they raced here at McAlpine back in August, Wyatt Maxey (Providence) and Ian Milder (Mount Tabor) have taken different paths.  Maxey ran 15:08 at WakeMed two weekends ago, while Milder had to cross-train for a short time to shake a minor injury (he is fit now, and ready to race).  The two friends will reprise their battle with a chance to break 15 minutes if the conditions are right.  Behind them, the race could be quite strung out, with Mihret Coulter (Apex) and Ryan Brady (East Chapel Hill) likely having to push each other in pursuit of third place.  There are only 8 boys coming into this race with a sub-16 time, although you can bet there will be a lot more leaving with one!  That means this will likely develop into a team-oriented race, although the SAT always takes a bite out of the competition in that regard.  Mount Tabor's boys would like to reassert themselves as a top-3 team in 4A, and they are close to full-strength; the same is true of South View.  Apex would like to move into that category, as well, and Chapel Hill continues to improve as a 3A title contender.  The team race would be even more exciting if RJ Reynolds had a full team, but with several top-7 runners testing, that won't happen.  It looks like North Carolina controls this race, with the top South Carolina team, Wando, rated 6th in the virtual meet.

In contrast to the boys' race, it looks like out-of-state girls teams might hog the trophies.  Riverside (SC) has already established itself as the top squad in the Palmetto State, while perennially-powerful Oakton (VA) doesn't want to travel all the way home without some hardware.  Etowah (GA) is in the mix, too, followed by the top North Carolina contenders: Myers Park, TC Roberson, and Mount Tabor.  Individually, Kayla Montgomery (Mount Tabor) has already won on this course once this year, and she will be seeking a sub-18 time.  That puts her in like mind with Ashbrook Gwyn (Aiken SC), who currently ranks second in her state.  Allie Klimkiewicz (Oakton VA), Maysa Araba (Carrboro), and Sydney Foreman (Ardrey Kell) should be close enough to benefit from the pace set by those two, and any of the three could make a small leap forward simply by hanging with the leaders.

Patrick Sheehan (Lake Norman) comes in with the best time, but Aaron Templeton (Hardin Valley TN) is the defending champion, having run 14:54 here last year.  Templeton currently ranks 7th in the Saucony Elite 50 Individual Rankings, and he will likely set a blistering pace.  In contrast to the team-oriented Championship race, there are 13 sub-16 boys in this one, and that should make for an exciting lead pack.  Adam Bernard (Daniel Boone TN) seems most likely to break away from that group to take 3rd place, but there are other candidates, including Pinecrest teammates Robert Anderson and Chris Kelly, who will also be looking to make a statement with their team.  Hilton Head (SC), Daniel Boone, and Oakton (VA) will make the team competition very interesting.

Last year, Hardin Valley (TN) got the best boys' time of the day out of the open race; this year, they might get that again PLUS the top girls time, as well.  Emma Mashburn  comes in having run 17:41 at a relatively tough Furman course, where she defeated Providence's Grace Sullivan by 34 seconds.  Sullivan and teammates Bianca Bishop and Kayla Glova are seeded 2-3-4 in the race, which puts the Panthers into the driver's seat for the team title.  Hilton Head (SC) and Hardin Valley are the closest competitors, while a young an improving Lake Norman team has a chance to insert itself into the spotlight with a good race.

The Championship race might have the most team excitement, and the Open race might have the fastest individual times, but you can definitely make the case that the 3A race is the most important (at least in terms of North Carolina schools).  In this race, closely-matched rivals race against equal competition, hoping to position themselves and build confidence for regional and state meet competitions over the next month.  Weddington is one of the top boys' teams in 3A, and North Lincoln (up from 2A for the first time this year) is right behind them, so this race could establish some momentum for one of those teams.  Marvin Ridge and Asheville are also working toward the state meet in that classification, while Lake Norman Charter vies to win the title in 2A that eluded them in 1A over the last four years.  A defeat of Carrboro would go a long way toward making that seem possible, but the Jaguars will not go down easily.  In front of all this team jockeying, 2012 3A individual champion Tanis Baldwin (East Henderson) will be pushing himself closer toward the 15-minute mark, which he may have to reach if he wants to defend.  Teammates Ryan Shannon and Andrew Fea (North Lincoln) will battle Gil Gilreath (Northwest Cabarrus) for spots in the top 3, but coming into the meet the front four are pretty spread out.

Alexa King (Marvin Ridge) very nearly became the first North Carolina freshman to break 18 minutes, coming up just 6 tenths of a second short at WakeMed two weekends ago.  That honor went to Sara Platek instead, but now King gets another shot, and on a very familiar and comfortable course for her.  Expect her to pull away early and push herself into the 17's, while a fierce battle rages behind her.  Allie Castro (North Lincoln) and Anna Vess (AC Reynolds) lead 5 girls that are right around the 19-minute mark, and that should create enough competition to allow some or all of them to elevate.  AC Reynolds wants to move up in consideration of 3A contenders, but they have worked mainly on slower courses this season; that could signal a strong step forward this weekend.  With state-meet opponents Marvin Ridge and North Lincoln in this race, there is a big opportunity for the Rockets to show their stuff.