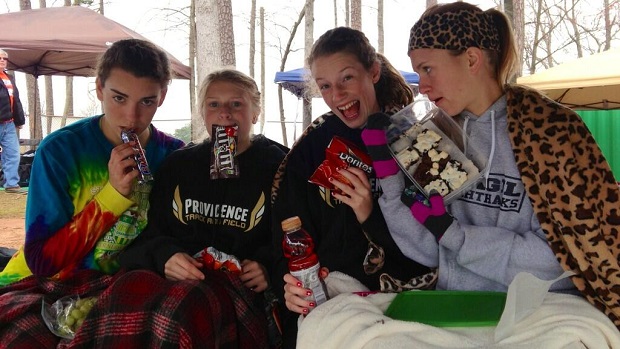 Many NC athletes, including the Providence girls, battled through adverse weather conditions to put up state-leading marks. 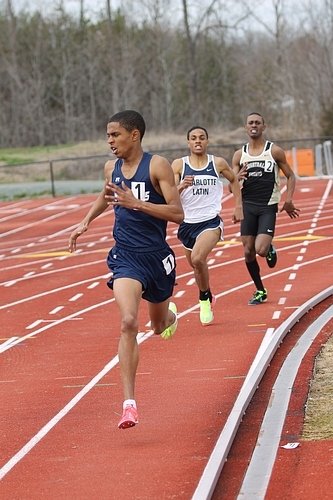 The 1600 races in this meet delivered as promised.  The girls' race produced a new state-leading time of 5:06.22 from Eliza Dekker (Durham Academy), plus a 5:10.74 by Jennie Cunningham (Pinecrest).  The boys' race featured a fantastic duel right to the end, with Nikolaus Kreiling (Jordan) prevailing with a time of 4:21.22 over AJ Tucker (Cedar Ridge, 4:21.61), both of them in the top 5 in North Carolina so far this season.  However, the cold weather did seem to put a damper on what could have been incredible races in the boys' 100 and 200.  Those two events came down to Northern Guilford's TJ Logan vs. Terry Sanford's Jahmaal Daniel, and in both it was Logan that came out on top, running 10.81 and 21.94.  It was the boys' 800 that really stole the show, though, with 5 guys earning MileSplit Elite times.  Philip Hall (Terry Sanford) led them all to the finish while clocking 1:53.62, the fastest in the state and US #7 at the time this was written.  Christian White (Charlotte Latin) ran 1:54.61, which earns him the #18 spot in the national rankings.  Bre'anna Warren (Western Guilford) won both the shot put and the discus, although the weather did seem to take a little bit off of her distances.  Not so for Winston Craig (Ragsdale), who threw a PR by over 10 feet, reaching 163' 2" to move into second in the state rankings.  The relays produced several new state leaders, starting with Northern Guilford's 8:09.12 in the 4x800.  Later, it was the Knightdale boys that took the top spot in two relays: they ran 42.38 in the 4x100 and 3:19.80 in the 4x400, which is US #17 this season.  Ethan Smith (Cedar Ridge) cleared 15 feet in the pole vault. 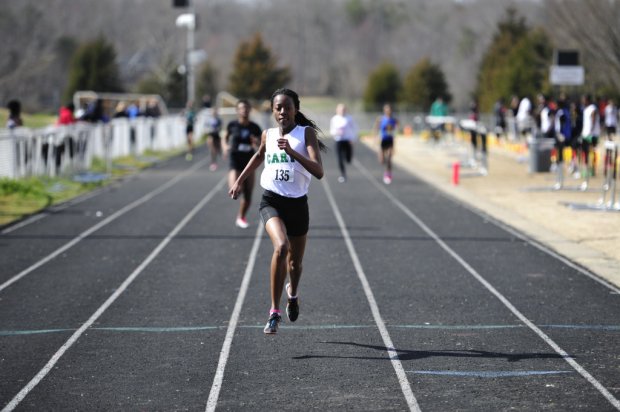 Even though this is a collegiate meet that only offers two high school races for each gender, there were 10 national elites produced here yesterday, second only to the Phoenix Classic on the day.  Broughton runners came through with the biggest performances, as Megan Sullivan ran 5:08.09 for 1600 and John Dalton Rohr came away with a 4:19.47 in the same event.  Ian Milder (Mount Tabor) pushed Rohr to the limit, losing by only 0.02 seconds and also putting up a personal best.  Cardinal Gibbons showed that they currently have the deepest collection of female distance runners in the state by putting 4 girls under 5:20 in the 1600.  This onslaught was led by the twosome of Mary Grace Doggett and Sophie Ebihara, who revisited their cross country tendency to push each other and produced times of 5:11.64 and 5:11.89, respectively.  In the boys' 3200, Jeremy Brown (Broughton) claimed the top spot in the state rankings by running 9:37.44, which is US #4 among freshmen.  Close behind was Dustin Sneed (RJ Reynolds), whose time of 9:39.45 also qualified as a national elite.

The biggest highlight here was the distance medley relay run by the Providence girls, who took over the state lead in an event that has been heavily contested this spring.  Their time of 12:50.57 puts them into the top 25 in the nation in that event.  In the other relay in which Providence leads the state, the girls' 4x800, the Panthers were defeated by Marvin Ridge, 9:47.63 - 9:48.18.  The Providence boys, perhaps inspired by their female teammates, also posted a state-leading time in the distance medley, running 10:54.80.  Kwame Donyinah (Myers Park) managed to power through the cold, wet air to run 10.78 in the 100, the fastest FAT mark in the state this season.  Khayla Dawson (Olympic), who is ranked among the top 5 freshmen in the country in the shot put, won that event with a throw of 38' 5".  Bryanna Hames (Myers Park) threw the discus 137' 2", the first girl to throw in the same range as state leader Bre'anna Warren so far this season.

The top performances from Danbury were in the field events, where Hunter Welborn (Starmount) cleared 5' 6" in the high jump despite the chilly weather.  Tess Rogers (North Stokes) continues to close in on the 11-foot mark in the pole vault, an achievement that has eluded her since 2011; she jumped 10' 8" Saturday, and that should add to her growing confidence.  Watauga's Doria Kosmala ran a solo 5:19.98 in the 1600, winning by almost 100 meters.

The race of the day was between McCann Sheridan (Robinson) and Elijah Inuwah (Central Academy of Technology) in the boys' 800.  The two battled all the way to the line, with Sheridan prevailing by only 0.01 seconds, running 2:01.67.  Jordan Warren (Hickory Ridge) became the 6th boy to jump between 44 and 45 feet in the triple jump this year with his 44' 7" mark, and he also cleared 6' 3" to win the high jump.

Two future North Carolina stars, freshmen Shellbi Chapman (Sanderson) and Breanne Bygrave (Wakefield), continued their ongoing competition in the high hurdles.  This time it was Chapman that came out on top, running a converted hand-time of 14.64 (Bygrave still has the top time in the state for 100 Hurdles at 14.32 FAT).  Chapman followed that up with a 46.44 in the 300 Hurdles, almost taking over the top spot in the rankings.  Meanwhile, Bygrave went in a different direction, turning around quickly to win the 100.  Parker Lee (Fuquay-Varina) nearly ran a PR in the 1600 despite winning by 20 seconds, and that could be a sign that something in the 4:25 range is in the immediate future.

Although there were not a lot of teams participating in the high school division of this meet, there was one big result: Southeast Raleigh's girls ran 48.26 in the 4x100.  They were competing under the club name of Bulldog Elite, and that could cause some complications; however, they have more than enough time left in the season to post another big time.  Ama-Selina Tchume (running under the Junior Striders club name) also had a good day, running 12.41 and 25.27 in winning the 100 and 200 easily.