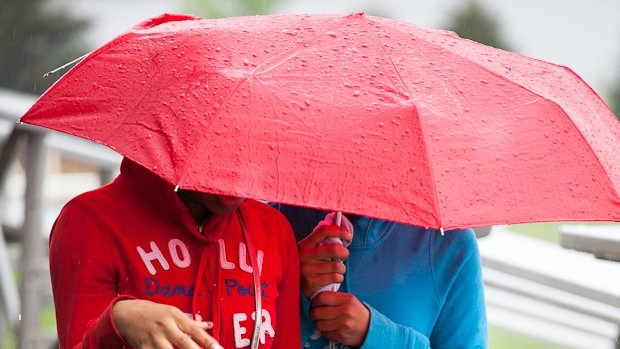 This particular weekend on the spring calendar seems to be cursed with difficult weather (like last year at the JJ Knox Invitational).

This weekend has the most invitationals of any weekend on the calendar, but it looks like the weather could be the big story.  All across the state, athletes will be bundling up and (hopefully) doing extra warm-ups to make sure they can compete at the best possible level as winter makes (hopefully) its last hurrah for the school year.  Despite the weather, though, there is plenty of talent lined up in the various meets to produce entertaining races and solid results, and there is a very good chance that the rankings will be rewritten by the time Sunday rolls around.

Regular track fans in North Carolina are familiar with these two superstars, but Bre'Anna Warren (Western Guilford, SP & DT) and Isaiah Moore (Cummings, 300H, LJ, HJ) seldom disappoint, and if you haven't seen them compete this year make it a point to check out their events.  Moore could face a strong challenge in the high jump from Sam Allen (West Wilkes), who cleared 6' 8" in a home meet earlier this season.  Thomas Jones (Cummings) could pull down wins in both hurdle races.  Lydia Laws (Western Alamance) is a little less well-known, but she is a quality hurdler and jumper and worth watching.

Last week, the Parkland girls dominated the sprints and hurdles at the Marvin Ridge Invitational.  Scary thought: they did that without Erin Morrison (7.29/40.31/1:18.53 this winter) in the lineup.  She is entered in a very strong 400 field that includes Layla White (Cary) and Raven Hamilton (Southern Guilford).  Look for the Mustangs to put up great relay times, and watch the girls' 300 hurdles to see if they can sweep the top three spots (as they are seeded).  In both the boys' 1600 and 800, Chris Reeder (Chapel Hill) will square off against Ariel Shores (Southeast Guilford); Chilton Birdwhistell (Middle Creek) could also get in the middle of that action.  There could be a Cary vs. Chapel Hill thing going on in the boys' 3200, with the Imps putting up Abel Tecle and Dean Abushouk against Bradley Viles and Tima Karginov for the Tigers.  The talented Cary 4x800 team is also loaded up in the individual 800, although they will have to fight through Alexa Young (Chapel Hill) if they want to try for a sweep.

James Drummond (Lexington) is a regular in our write-ups, and he will try to dominate the 100 and 200.  Paul Taylor (Cary) has a chance for a double win in the hurdles, but will have to defeat South View's Xavier Brown in the 300 to get there.  Gary Woosley (Northeast Guilford) is the force that drives a surprising Rams team; he is looking for sub-50 in the 400, and he is also the top seed in the long jump.  Phillip Thomas (Cary) is emerging as a serious contender in the pole vault, and should win easily if he jumps up to his standard here.  Indy Reid-Shaw (Orange) is the top seed in both the 1600 and 3200.  Myles Braswell-Sample (Northern Durham) does not have the name recognition that some of the other top throwers in the state might have, but his PR is 53' 5.5".  Layla White (Cary) went sub-25 last week in the 200, and Ebony Williams (Parkland) is emerging as an all-around star with the chance to win both hurdle races here.  It looks like Brooke Shelton has decided to represent Ledford this spring; she may find herself taking her first vault after the other competitors have finished.

One of the oldest meets in North Carolina, the Queen City Relays always collects together a good combination of talent and some fun events.  This is a staple of the Charlotte area, and always seems to draw in some solid teams from out of the area, too.

Primarily a college meet, there are high school 1600 and 3200 races mixed into the schedule.  Word has it that several top distance programs are attending, including a few of the Raleigh-area powers.