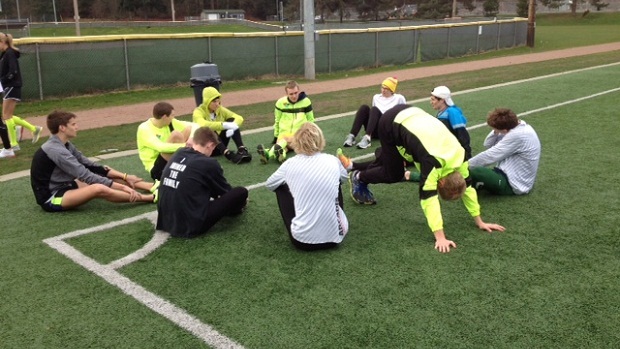 Coach Miragliuolo gives us a few glimpses of what happens on Saturday, the first full day in Seattle for the athletes.

The athletes competing in the Brooks PR Invitational arrived in Seattle on Friday, and so they had their first full day together on Saturday.  Coach Mike Miragliuolo of Green Hope, in town courtesy of his participation in the Brooks ID program, has been kind enough to share his experiences with NCRunners, and to send along some photos to go with his description.

Brooks is pretty strict about not letting athletes leave the hotel without a chaperone, so coaches met groups o athletes in the morning and walked them to a restaurant down the street for a buffet style breakfast. I walked over with Wesley Frazier and talked to her about some of the national level races she has been in. It is really cool that she is at such an elite race with her sister, but yet they also seem to have made their own friends and are able to do their own thing. Wesley seems really ready to run another great race tomorrow.      After eating and walking a couple groups of runners over and back, I got on one of the motor coaches to head with athletes to Green Lake Park for a run. Runners did not have to go, but all of the distance runners did as they wanted to get some miles in. At least half of the sprinters did as well. The sprinters did some light running, stretching, drills, and lots of strides on an artificial turf field. We were given a total of 45 minutes before we had to get back on the bus to head back to the hotel. I did a 3 mile run with about 9 of the 3200 guys and it was a great time. One of the boys, Bernie Montoya, was asked by Brooks to wear a camera around his neck for the run so it was all caught on camera. Runners traded stories of past meets and workouts. I asked several what their favorite workout was and the answers varied from 1600 repeats with only 60 second recoveries to 400 repeats on a track in sets of 4 to a runner from Arcadia (CA), Estevan De La Rosa's favorite: 3x3200 at 9:15 pace with 4:00 recovery. Our group ran at a fairly moderate pace and did some strides after. Bakri chose to go at a slightly quicker pace and he ran around 6.5 miles. Overall it was a good run and we were lucky to have cool temps, but no rain for the run.      We had about 45 minutes at the hotel to shower and grab a bag lunch before boarding one of four "duck boats" and heading off on a 2 hr tour of the city. The duck boats are one of the most popular things to do in the city, as they are buses that can drive into the water. The drivers played an assortment of music and kept it very lively. Athletes and coaches ate their lunches on board and danced to the music in an effort to stay warm. It also provided a bit of a Seattle history lesson and was a very unique thing to do for the runners.     The remainder of the day involved athletes making sure they had the right sized gear, time in the game room, and an athlete-coach dinner in the hotel.      Even though they have been having a lot of fun, it is obvious that many runners are starting to think a little more about the race looming tomorrow. While lots of athletes have committed to a college, others are hoping for a great time to impress the coaches that will be at the Dempsey Sunday. One of the things that has been really cool to see is how many runners are from so many different places in the US. In my 3200 group alone we have 2 runners from Montana, 1 from North Dakota, and athletes from 10 other states (out of 17 runners). It reminds you that being a good runner has nothing to do with where you come from, but how hard you are willing to work.      Sunday morning will be fairly uneventful as everyone rests up for the big afternoon meet.